How to combat the risks of Legionnaires' disease from cooling towers Cooling towers form the primary means of heat removal for heating, ventilation and air conditioning (HVAC) systems. HVAC systems are found across an array of industrial and commercial buildings. They come in many different forms, but are basically large-scale versions of the air-conditioner you might have at home.

Cooling towers work to reduce the temperature of water in the system after it has been heated by industrial equipment and processes. This process is called heat rejection. By evaporating a small volume of water, the rest of the system is cooled. The cooled water then gets sent back into the building to start the cycle all over again.

Regular and thorough maintenance of these cooling towers is critical as improper maintenance can lead to a variety of problems. Cooling towers tend to be out of sight and out of mind, meaning that it is easy to overlook their maintenance until something goes wrong. Coupled with this, the location and the physical design characteristics of cooling towers means that performing that maintenance work is not without risks. 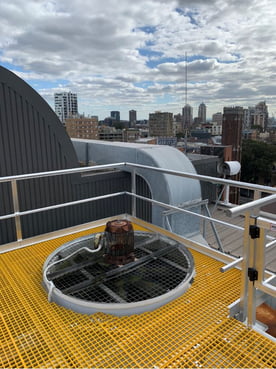 As cooling towers tend to be located on roofs, maintenance technicians are exposed to all the risks associated with working at heights. Falls from height are, unfortunately, one of the most common causes of workplace injury and can lead to serious, permanent injuries and even death.

According to SafeWork NSW, between 2014 and 2017, more than 12,000 workers were injured after falling from a height. Of those, 25 died and more than 240 were permanently disabled. Although there are risks involved in servicing cooling towers, the risks of not conducting regular maintenance can be equally as severe. A lack of maintenance can lead to inefficient operations including decreased functionality and irregular temperature controls.

In extreme cases, poor maintenance can lead to an outbreak of Legionnaire's disease.

What is Legionnaires' disease?

Legionnaires’ disease is a type of bacterial pneumonia that infects the lungs. It takes its name from a 1976 American Legion convention, where the bacteria was first discovered. The convention took place at the Bellevue-Stratford Hotel in Philadelphia. Within a week of the convention, over 130 attendees had been hospitalised with pneumonia-like symptoms and 25 had died. Several months later, an investigation found the bacteria had been breeding in the cooling towers of the building.

Legionnaires’ disease can unfortunately be fatal. The bacteria causing the disease, from the Legionella family, occurs naturally in freshwater.

The disease can be transmitted by inhaling very fine water droplets that contain the living bacteria, it is not transmitted from person to person. Most commonly, people are infected by breathing in aerosols generated by artificial water systems including cooling towers.

The common symptoms of Legionnaires’ disease include a cough, shortness of breath, fever, muscle aches and headaches. If left untreated, the disease usually worsens during the first week and death may occur due to shock and multi-organ failure.

Australia has not been without its own incidents of this disease.

Perhaps the most notable outbreak occurred in April 2000, 125 people contracted Legionnaires’ disease after visiting the newly opened Melbourne Aquarium. It was found that Legionella bacteria had taken hold in the air-conditioning system. Approximately 76% of patients were hospitalised and there were four fatalities. This is a prime example of the dangers associated with poorly disinfected/treated cooling towers, regardless of their age.

A similar outbreak occurred in 2016 at Sydney’s Town Hall which was also linked to air conditioning systems. Nine people contracted the disease between February and March 2016, with four needing to be hospitalised. There was one fatality. A second outbreak occurred in May, infecting a further six people. Although an exact source of the infections could not be determined, an investigation by NSW Health found 13 cases and two cooling towers shared a common strain of Legionella. 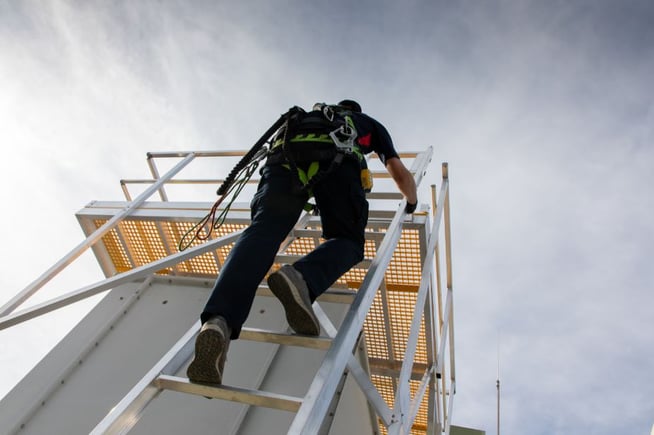 Proper maintenance and regular cleaning of cooling towers is critical to ensuring that the risks of a Legionella bacteria outbreak are managed. In NSW this means cleaning must be managed in accordance with AS/NZS 3666 Part 3 and also be in compliance with the Public Health Act 2010 (NSW).

The Regulation sets out six key requirements that must be met as part of the risk management approach:

As evidenced above, regular access is required to a cooling tower on at least a monthly basis. However, the location of these cooling towers on roofs and in plant rooms, and their inherent physical design, introduces additional risks that must also be addressed. WHS Legislation requires a person conducting a business or undertaking (PCBU) to provide safe access to all parts of a place of work to which access is required and from where a person may fall.

Performing maintenance on cooling towers involves working at heights. For technicians, this means they should have the skills and knowledge required to safely perform this work. These skills are gained through the completion of the RIIWHS204D Working Safely at Heights Course. 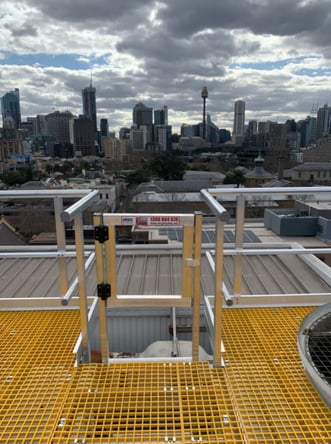 For building owners, facility managers and PCBUs, the risks associated with working at heights while performing cooling tower maintenance can be addressed through the installation of a permanent access system.

The experts at HSE can design and install cooling tower access platforms to make working on the towers more efficient and, more importantly, safer. Having compliant access to cooling towers assists technicians in staying safe while performing their work. Improving access and making it less difficult also makes performing regular maintenance on your cooling towers easier. This means it is more likely to be completed on a regular schedule which significantly reduces the risk of people contracting Legionnaires' disease.

Does your business need help with cooling tower access or heights training?

Height Safety Engineers work with the leading suppliers of height safety and fall protection components and our decades of experience mean we can design a compliant and cost-effective cooling tower access for your building, no matter your HVAC system or roof design.

It is important that cooling towers undergo regular maintenance as this keeps building occupants safe. It is also important that the technicians carrying out this maintenance also be kept safe. Height Safety Engineers are the height safety experts. Our experience and best practice designs ensure your towers access system meets the Australian standards and is compliant with Australian law. We can design and build access systems no matter your situation. Contact our team today to ask about your cooling tower access needs, just click here to get in touch.